Can we predict the future course of history? 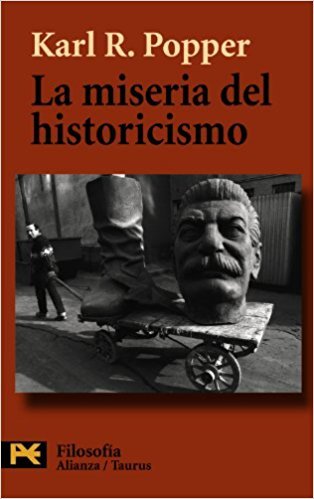 I posted recently (No “right sides” to history) on a type of globalist thinking that sees a borderless world as the inevitable endpoint of history. That moved me to dig up my old paperback copy of “The Poverty of Historicism”, Karl Popper’s classic polemic, published in 1957, against social theories that claim to scientifically establish laws of historical development, and so to prophecy the inevitable next stages of history.

Popper says in his 1957 Preface that he had developed the main arguments in the book by 1935. These, he thinks, show that “historicism is a poor method—a method which does not bear any fruit. But I did not actually refute historicism.”  Since then, however, he says, “I have succeeded in giving a refutation of historicism: I have shown that, for strictly logical reasons, it is impossible for us to predict the future course of history.”

Here is the outline of the proof:

The key step in the argument is statement (2), about which Popper says, “I think that it is convincing in itself: if there is such a thing as growing human knowledge, then we cannot anticipate today what we shall know only tomorrow.”  The point, presumably, is that if in 1957 you had had a clear idea about a future discovery called the internet and how it would work, then that discovery would not be in the future, it would be part of the knowledge of 1957. 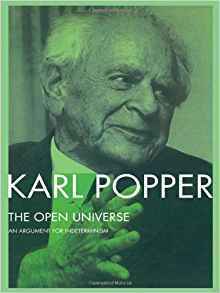 Although Popper thinks that his brief argument for step (2) is sound reasoning, he accepts that it does not amount to a logical proof. But he adds that he has developed such a proof in separate work - work that was only published later, in 1982, in his book “The Open Universe: An Argument for Indeterminism”. Of this proof he says (still in his 1957 preface) that it “consists in showing that no scientific predictor—whether a human scientist or a calculating machine—can possibly predict, by scientific methods, its own future results.”

I haven’t read “Open Universe” and so must leave matters here for the moment. But here is a review of the book in the LRB by John Maynard Smith, the evolutionary biologist.  One also wonders what technological futurists like Ray Kurzweil might think of Popper’s step (2).

Popper makes one other important point in the 1957 Preface to “Poverty of Historicism”.  His 5-step refutation of historicism “does not, of course, refute the possibility of every kind of social prediction; on the contrary, it is perfectly compatible with the possibility of testing social theories—for example, economic theories—by way of predicting that certain developments will take place under certain conditions. It only refutes the possibility of predicting historical developments to the extent to which they may be influenced by the growth of our knowledge.”

So Popper’s argument shouldn’t necessarily preclude work on Cliodynamics – the quantitative study of processes of change in history – by Peter Turchin and others. Turchin has a nice piece here on scientific prediction versus prophecy.  Cliodynamics is not about making unconditional predictions of the future, he says. “Cliodynamics, instead, is about understanding why and how social systems change. We look for general principles (‘laws’, if you will), and build mathematical models based on these principles. Then comes the most critical part – testing model predictions with historical data so that we can tell which models and theories are correct, and which are not. So prediction is instrumental – it is subordinated to the main goal, that of understanding. … It is useful to distinguish this kind of prediction, which is subordinated to the main goal of testing theories (I’ll call it ‘scientific prediction’) from prophecy. A prophecy is an unconditional statement of what will happen in the future. For example, ‘life on Earth will end in 2012.’ “